I may have gone insane.  Just slightly.  I'm considering (well, pretty close to decided) getting into Lolita fashion.

Some of you just jumped for joy at the thought, some of you are confused, and some of you are slightly disturbed because you have certain connotations with the word "Lolita" already.  I can assure you, it's not what you think.

For those who don't know, "Lolita" is the general name for a type of fashion originating from Japan.  There are several sub-types of Lolita, but the overall style can be characterized by feminine details, voluminous skirts, and a sense of youthfulness.  Lolita is not an attempt to attract pedophiles; the name for the fashion was probably chosen by someone who didn't know much about the novel beyond "there's a beautiful young woman in it".

Anyway, the other day I woke up and checked Tumblr (like ya do) when I noticed that a friend of mine had reblogged a couple of photos of lolita outfits*.  It was like a tiny voice inside of me was just saying "You should try that.  You should try that." It got me out of bed within five minutes of waking up on a Saturday (not an easy feat) to head over to my computer and search out information on Lolita.

I have fallen down a strange rabbit hole.


I do like the silhouette of Lolita; it's very attractive and flattering on just about every body type.  I also know it isn't a fetish, and it isn't something degenerate or perverse.  But there are a couple of things that I'm still working on. 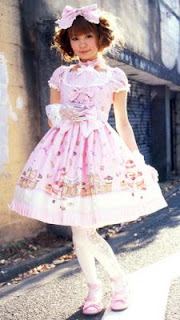 First is the fact that one type of Lolita, called Sweet Lolita, can sometimes look to me like my grandmother's dolls.  It puts me off by the sheer cutesiness of it, and also by the cognitive dissonance that sets in when I see grown women attiring themselves in such a way that I'm reminded of baby dolls.  I know, however, that there are lots of girls and women who truly feel beautiful when dressed like this, and it's not my place to tell them to stop doing something that makes them feel good and doesn't hurt anyone.  It's not their job to change how they express themselves; it's my job to get used to it and come to a new understanding.

The other misgiving I have about Lolita is that there seems to be a serious consumerist streak in the fashion.  You hear a lot of talk about brands, and things being "brand" or "off-brand".  Now, I understand that Lolita would probably not exist were it not for companies like Angelic Pretty making and marketing the aesthetic, but I come from steampunk, which is a culture which actively encourages and celebrates making things.  You get a lot more love for making your outfit and/or gadgets than you do if you just buy up a bunch of clothes labelled "steampunk" from a store.  Lolita, while not the opposite, is very different.  People who make their garments are still celebrated, but it seems to me (granted, I am an outsider looking in) that brands tend to rule.  The clothes are also very expensive when bought new, because the brands make clothes in a very high quality with custom prints on the fabric, so you have women spending hundreds of dollars on perfectly coordinated outfits.  For someone who doesn't have a job, that gets daunting; for someone who generally resents American culture's consumerism and the constant push to buy moremoremore, facing the task of sanely building a small beginning Lolita wardrobe without exploding from sticker shock and credit card debt is VERY daunting.

In spite of all of this, I think I'm going to forge ahead.  The aesthetic is just too appealing.  In a couple of weeks I'll be buying a petticoat, and depending on costs I'll be getting lace and ribbon to take some t-shirts and make them into cutsews**.  Hopefully all will go well and I'll come out of this happy and pretty.

Really quick, so that it's said: Sweet Lolita isn't all that's out there, and the choice isn't even between Sweet and Gothic (lots of people are only aware of these two because of anime).  The other most common style of Lolita is called Classic, and that's what I'm drawn to the most.  Classic is a bit more mature, a bit more flexible, but still feminine and youthful.  Basically, it's right up my alley: So yeah, I'm gonna work towards looking more like that... without going bankrupt before I'm out of college.

I'll let this little ten-minute documentary play me out.  There are some interesting things brought up that I could cover in a future post (with regards to feminist things), but it's also just a great way to see Lolita in action.


*In lolita, they're not just "outfits".  They're coordinates.  Still kinda wigged out by that, to be honest.
**Cutsews are Lolita tops made from knit fabric as opposed to woven cotton.  They're essentially made from t-shirt material and great for more casual days.
Posted by Unknown at 10:32 AM