Meatballs, Vikings, and a Man in a Skirt: My Easter Holiday 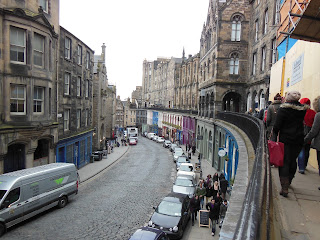 Hello, friends!  The blog's been quiet for the last few weeks as I've been travelling.  The uni I've been at while studying abroad has a three week Easter break, so I took advantage of that time to go to some places which I've dreamed about visiting for years: Sweden, Scotland, and Ireland.

I had an amazing time, and I've only been slightly inconvenienced by the fact that I'm a female travelling alone.  I've visited several natural history museums and stared at lots of taxidermied birds and pangolins, motivated out of my love for a little YouTube show called The Brain Scoop.  I've also seen works of art by the greats--Titian, Rodin, Van Gogh--for free.  I learned about Vikings in countries which had been invaded by them.  I've knit in pubs and read theology in restaurants and gotten lost both accidentally and on purpose.  I listened to Swedish poetry and Irish folk music and could barely escape the sound of bagpipes, as there was a player on nearly every street.  My accent changed with each person I talked to, frequently with each sentence.

Beyond the things I did, however, were the people I met.  They're the true highlight of this adventure.

In Sweden, I slept on a bed set up in the corner of my distant cousin's living room.  We'd never met before, but she'd offered her and her fiance's apartment as a place to stay, and I took it.  She took me to her favorite touristy things in Stockholm on all of the days she had off from work.  By the end of the week, not only were we talking and laughing easily around each other (I was honestly afraid that my shyness would make for an awkward visit), but I had gone to Easter dinner with the whole Swedish family, meeting cousins whom I'd only heard about as a child.

After that, I went to Edinburgh, where I stayed in a hostel where I met young women from all over the world: Australians, Koreans, Canadians, German Serbs.  Each had their reasons for travelling, each had their stories.  They came and went, but for a brief time our lives joined up in a way that would have been impossible not that long ago.  I also met a veteran who had ended up homeless and had an impenetrable accent, but was friendly and chatty and told me that it was actually completely worth paying £16 to tour Edinburgh castle.  On Sunday, I went to a queer-affirming Episcopalian church, was anointed, joined the congregation for coffee and rolls after the service, and spent half an hour at least talking to a woman about my travels and studies and goals.    I met the rector, American like me.

Finally, I arrived in Dublin hoping that I would be able to identify the man who was letting me stay with him; a friend of my sister, whom she'd met through an online community centered around a Slenderman web series/alternate reality game.  I knew him by his Internet name ("Chewie") much better than his real name, and I was worried again that things would be awkward because I'm eccentric and nerdy.  Instead, I was greeted by a man with a scruffy beard and long ponytail who was wearing a patchwork leather jacket and a skirt made from worn shorts.  He had a folklore degree and referred to coins as "shrapnel," and he was open and friendly right away.  Upon arriving at his flat, I met Chewie's pet crow, a surprisingly adorable little bird with a lame wing and spazzy leg, and his housemate, who kissed my hand instead of shaking it.  Chewie runs an alternate reality game in the same universe as the one through which he met my sister, and I got to be involved by being filmed tied up in a tunnel and crying while the Morrigan tortured Chewie's brother (trigger warning for torture and general creepiness).* Read the footnote before watching the video, please


I don't know why I was afraid of not being comfortable around Chewie; my sister and I have shared friends since she was in high school.  Chewie and I get along easily, have a similar sense of humor, and pretty much instantly relaxed around each other.  I hope that we remain in contact and that we can collaborate in the future (as much as I swore up and down to not get involved in an ARG because it involved horror and making/editing videos, I find myself wanting to continue my character's story beyond being tortured by a wicked deity).

My months-long stay in London has already been magical; this trip has turned the beauty and wonder up to eleven.  I've made friends I hope to keep for a long time, learned skills which my privileged and relatively sheltered life have kept me from developing until now, and acquired a number of accents and speaking habits which will take a while to shake (and honestly, I don't want to shake them).

I'll be in England until June, with no classes or outside responsibilities.  I don't know what I'm going to do with all of that time, but I hope I'm able to make the best of it.  This has been an amazing holiday, and an amazing term.

*Hugely necessary quick and dirty explanation of the premise of Chewie's ARG here (seriously, the video will make a bit more sense if you read that first)