Of Sewing and Sexism

Welcome!  Come on in!  Take a seat!  Let me make some tea.  Oh, this apron?  Yes, I sewed it from t-shirts.  Help yourself to a cupcake, I just baked a fresh batch!  Why thank you, I like this lipstick too!

...no, I won't make you a sandwich just because I'm a woman in the kitchen.

No, I'm not caving to a patriarchal standard of beauty because I like wearing dresses.

Yes, that really is a picture of my girlfriend and me.  Yes, as in my partner.

That seems to be my life.  It's like, by virtue of my personality, biology and brain structure, I break a million stereotypes all at once.

So instead of accepting that and moving on with my supposedly contradiction-ridden life, I choose to make it a full-time job.  Because apparently there are people who still think:


So what's all this then?

THIS is a blog.  About crafting.  And being queer/a feminist.  You may have noticed the pun in the title.

DIY (sewing, knitting, etc.) is a major source of joy in my life.  I love taking a couple of balls of yarn or a pile of fabric and turning out something beautiful.  I also love the process, watching these raw materials come together to create a whole new thing.  Like taking flour, water, sugar and eggs and making a delicious braided egg bread.  It's fascinating to see unique things and the steps one takes to create them.

Another major part of my life is my activism.  As a queer woman, I have to fight for things that other people take for granted.  Right now, in over 40 states in the US, I cannot legally marry the woman I love.  There are states trying to render illegal the hormone pills which make my period bearable.  Politicians and clergymen alike are talking about the joy of the home for women as if they know better than we do what is supposed to make us happy in life.  I fight these things, because they're personal.  I fight them every day (to the annoyance of my Facebook friends).

The problem is, it seems so often like the above two things are in conflict.  Because I love to do things traditionally considered feminine, I must be caving to a patriarchal system where women are forced to be docile domestics with no mind of their own.  Because I fight against patriarchy and homophobia, I am unfeminine and bitchy and uppity and not a "real woman"*.

I don't want to be surprising because I'm a Christian lesbian feminist who loves herself some yarn and needles.  I want to be awesome, but not surprising.  That's why this blog exists: I want to share my life as a crafter and as an activist to prove that there is nothing discordant about those things.  Also, I can stop talking my mom and girlfriend's ears off about knitting, because I know I'm getting annoying. :P 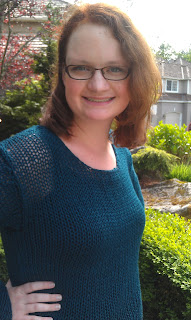 HAI my name is Sonja!  I'm a university student in Southern California.  I've been sewing since I was 14 years old, knitting since I was 17, and questioning the status quo for as long as I could talk.  My other hobbies include walking in the grass barefoot, staring at the sky, singing, and drinking coffee.

I hope you enjoyed visiting here.  Maybe you'll come back.  Maybe you'll become a regular.  Maybe I'll eventually convince you to join my evil legion of cupcake-baking feminists and together we'll take over the world I mean, what?

*I don't think that there's ANYTHING wrong with being a masculine or androgynous woman; I just observe the expectation is there and it doesn't apply to me, and that's annoying.
Posted by Unknown at 6:40 PM