There was a time when I was uncomfortable with makeup.  I saw it as little more than a ploy to convince women to feel bad about themselves, that they were ugly without makeup and only close friends, family and long-term partners should be allowed to see them without makeup on.  Then and now, I like the look of my naked face.  Even when I had really low self-esteem, it was about the rest of my body, not that much about my face. 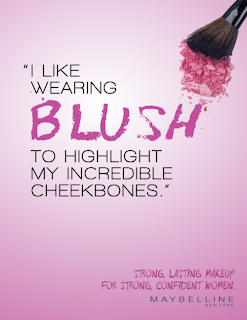 But in my senior year of high school, I realized that studying acting in Southern California meant I would have to  get used to wearing makeup not just for stage (something I openly enjoyed, because of the transformation factor in stage makeup), but every day.  I knew the Professional Theatre World wouldn't take me seriously without it.  So, Mom and I went to a drugstore and I picked up some stuff.

Little did I let myself realize, but I actually enjoyed applying makeup.  It was the transformation aspect that I loved in stage makeup but on a smaller scale.  I loved seeing how a bit of liner, mascara and foundation could subtly (or not-so-subtly) alter my appearance and enhance certain features.  I started enjoying the compliments I was getting for my improving skills, and eventually became enthusiastic about messing around with colors to create different looks.

These days, I still don't feel a need to wear makeup if I'm just wandering around school or home or hanging out with friends.  I will, however, make a point to at least put on foundation or something for auditions or any time where a camera is likely to be involved, such as photographing myself modeling a completed sewing or knitting project or when I'm dressed in full steampunk.  Cameras are harsh and unforgiving creatures; something about the way they take a 3D object and squish it into two dimensions makes me look... well, let's just say I suck my stomach in when posing. 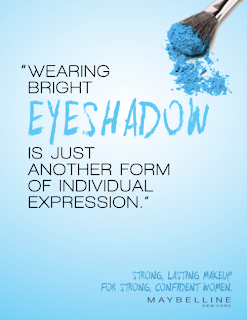 What I remain keenly aware of, however, is the way makeup is advertised and pushed onto women.  For the majority of cases, it's about making women look "flawless," covering "trouble spots" and highlighting parts of the face one likes.  Even if cosmetics companies will put out campaigns (like one from Maybelline which I'm highlighting in the pictures) encouraging use of makeup as self-expression, the message more often than not is that of "You should really cover that zit and those freckles and those wrinkles and those under-eye circles and..." You get it.

So this is where I, as a relatively conventionally feminine woman, struggle.  While I personally view makeup as an art form, something with which to play and experiment, it's marketed as a fixer.  While I wear makeup to evoke different eras or characters, the advertising says that I'm supposed to use it to let the "real me" shine through- as if my naked face isn't real!

When Monster starring Charlize Theron came out, people marvelled at how "ugly" she looked (if you haven't seen what Charlize Theron looks like "normally," she's the evil queen in Snow White and the Huntsman).  Everyone thought it was skill with makeup, when in fact it was Theron's naked face, dentures, and an unforgiving camera lens; but because she wasn't concealing all of what cosmetics companies would call her flaws, people assumed she'd been uglified with makeup.

We've come to see makeup as the baseline for attractiveness, so when women don't wear it, they're seen as less attractive.  We ogle celebrities in "Stars Without Makeup" sections of magazines as if they're alien creatures.

All of this is in the background of my mind when I visit a Sephora.  You can ask anyone in my family, they'll tell you my favorite store is Sephora.  I love going in there.  I feel the artistic potential thrumming as I look at the bright colors and artwork.  But even as I marvel at the pretty eyeshadows and lipsticks, I remember the message sent in pushing these very products I enjoy.  I'm told when I walk in there that I am not pretty without these things, and how kind it is for the cosmetics companies to provide me with help, if I'll only shell out $40 for foundation.

If it wasn't obvious already, I'm not against makeup.  I enjoy it as a form of self-expression.  But I always remember to keep in mind the messages I'm being sent while I shop, and I have to remember to consciously reject those messages and remind myself that God gave me my naked face, and no matter what anyone says, it's a beautiful thing.

So put this on your mirror, ladies: You weren't born wearing makeup.  You don't need it.  You look beautiful.

Until next time, friends. <3

Side Note: If you couldn't tell, I'm still somewhat insecure about my appearance when it comes to photos..  I'm gonna own that and acknowledge that it's something I need to work on.
Posted by Unknown at 10:56 AM