God is Not a Man

Many people don't know this, but I internally cringe when I hear people refer to God as "He" without a second thought.

After all, many of these same people would likely say that they don't believe God has any gender; they just use "He" because of habit or "it's as good as gender-neutral" or whatever.

Setting aside the fact that the queer community has been using a wide variety of truly gender-neutral pronouns for a while, we need to ask why "male" is considered "gender-neutral".

About half of the world's population is female*.  Every human on the planet began as anatomically female in the womb, before hormones finalized our birth sex.  To say that male is gender-neutral is to neglect these facts (then again, people who would continue to insist that God is male probably aren't going to accept the science of fetal development**).  Also, while men and women aren't fundamentally, practically-different-species-level of different, there are still differences in how we experience the world.  To make a general comment about humanity while using male-identifiers is to negate that.

I started thinking about why I use male pronouns to refer to God last year.  I had never been taught that God is specifically male, but my church talked about the Trinity as the Father, the Son, and the Holy Spirit.  The Son is referred to as such because the Son is Jesus, a male.  The Father is called such because Jesus and many other places in the Bible refer to this aspect of God- the Creator- as such.  The Holy Spirit, while not masculinized in name, may also be referred to by male pronouns, as my pastor did just last week***.

Many people stop there.  They see "God the Father" and say "Well, there you go.  That's why I use male pronouns," or even "That's why God is male." I remember having a conversation with a young man who half-objected to my using gender-neutral pronouns, and when I explained my reasons ("God has no gender"), he responded that God identifies Themself as specifically male.  I asked for verses to back it up.  He suddenly dropped the issue and said it was just "an issue of semantics".

To focus on the masculine images of God is to ignore the many beautiful references to female imagery in the Bible.  These verses stir me in a very fundamental way; perhaps because they let me relate to God in a new way, a way in which I know that God knows what I'm going through and what I will go through, as a female.  Some of my favorites:
Even Jesus gets in on the action:

“Jerusalem, Jerusalem...How often have I desired to gather your children together as a hen gathers her brood under her wings...” -Matthew 23:37

And that's just a sampling.  So it's clear that God considers Themself more than masculine.  God the Father is also God the Mother.

With all this in mind, why continue using male pronouns to refer to God?  My only reason I had left was "habit," and that's just silly in my opinion.  I felt that my "habit" was limiting my perception of God and my relationship with Them.  So I chose to stop referring to God as a masculine entity.  I couldn't in good conscience perpetuate an exclusively masculine image of God.

People, especially people older than me, question why we should worry about what pronouns we use to refer to God.  They see no harm in it, because they personally understand God as genderless.  But from where I'm standing, masculine pronouns do continue the image of a masculine God, and all the understandings of masculinity that come with (power, domination, assertiveness), while simultaneously stifling the image of a feminine God (nurturing, protective, loving).  God can be all of these things, but not only to people seem to get uncomfortable when thinking of God in feminine terms, some are outright hostile to it.  Theologian John Piper recently stated that Christianity has a "masculine feel".  And people wonder why women are leaving the church in droves.


I believe it is important to fight against the image of an exclusively masculine God.  Such an understanding of God limits our perception of Them, and our relationship with Them.  It sends the message that women are less Godly or more separate from God than men.  It elevates men above women when, in Genesis 1, it is stated that both were created in the image of God.

God is not a man.  God is not a woman.  God is all genders, and none.  It's time we start owning this understanding, instead of caving to tradition and habit.  I think Christianity will be better for it. 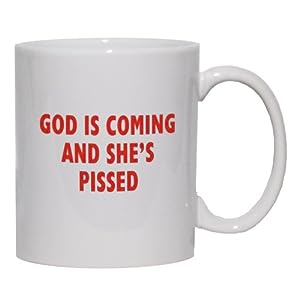 *Dear non-binary friends: Please forgive me, but I'm having to talk in binary terms.
**Dear non-religious friends: Bear with me; I do believe in God and will speak from the position that They exist.
***Never mind the fact that the original Hebrew and Aramaic terms for Holy Spirit were feminine.  Nope.  Not relevant.  Not at all. </sarcasm>
Posted by Unknown at 9:24 AM