An Interest in Vaginas

Every morning at 10 AM, the TV in my family's apartment broadcasts The View to no one in particular.  I don't normally pay attention to the show, because they mostly talk about pop culture I know nothing about and interview celebrities I've never heard of.  But the other morning it came on, and they opened the show discussing the Michigan House of Representatives banning a female legislator from speaking on the House floor because, in a debate about aboriton legislation, she dared say "I'm flattered you're all so interested in my vagina, but no means no." 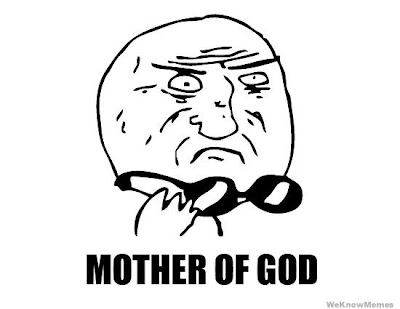 What the ladies on The View ended up talking about wasn't the debate taking place in Michigan; it was about how skittish people have gotten about the proper name for body parts.  Barbara Walters told the others about how she'd been told by sort-of censors that they couldn't say "vagina" in front of the previous day's audience, which had been made up primarily of preteen girls (Justin Bieber was going to be performing).  She responded by saying "I can say nose and ear, right?  It's just another body part." One of the other women then commented how the majority of their audience has vaginas.

All of the women, for once, were in agreement on this issue: we're too sensitive about the words "vagina" and "penis"*.  Elizabeth Hasselbeck, whom I normally don't like, earned awesome points with me for describing how she's always taught her children to use the correct words for their body parts, and she's never been shy about using them in public with her kids.

What the women of The View all noted, and what I think we should all be aware of, is that by coming up with euphemisms for our body parts, we send the message that there's something dirty about them.  We're so ashamed of our bodies that we have to come up with cutesy or bizarre names to allude to something that should be so simple.

My mother worked as an ER nurse for 20 years, and even in the setting of a hospital there was a certain taboo.  Doctors talking to patients would use "vagina" and "penis" perfectly professionally, then when talking with coworkers those same words gained shock value.  What is wrong with us?

Vaginas and penises are useful for sex, yes.  But you know what?  Armpits can be useful for sex, but we don't come up with cute names for the armpit because "Ooh, the word is too sexual for polite conversation, ooh!"

Likewise, vaginas and penises have uses beyond sex**.  We just focused so hard on the sexual aspect of them (with sex already being a taboo topic in polite American society) that now we can't see past it to realize what they are body parts like any other.

I used to be extremely uncomfortable saying the word "penis" without whispering it.  I still feel kinda funny writing it out on a public blog post.  But I learned to get past it when I became the Mama of several young gay men at my high school.  I read a lot of Dan Savage columns and talked to older friends, so that I could learn and give advice for those coming after me.  I had to get over my socialized sense of the taboo nature of the word "penis," something that had been deeply entrenched in me for most of my life.

So say it with me, friends:

They're a part of us, a part of our bodies***.  I have a vagina and I do my best to care for it, just like I care for the rest of my body.

We needn't be ashamed of our body parts.  So let's just loosen up a little and talk frankly about these things, okay? 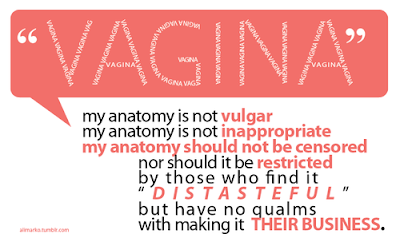 *Hopefully none of you just had heart attacks...
**Just like breasts, but that's another post.
***Some people feel that their bodies don't reflect who they are; a penis does not a man make.
Posted by Unknown at 10:30 AM