So to keep my always-itching hands satisfied while waiting for my tendons to heal (too much knitting), I've taken up crochet.  At least, I'm doing the best that I can with the stuff written in my knitting book.

The author only put in enough crochet info to help knitters with whatever they'd need crochet- chains for ties on hats and things, single crochet for neckline edging, and crab stitch for tightening loose edges.  With that, I took up my sister's old crochet hook and some scrap yarn and went for it.

My first swatch, I'm proud to say, is an utter derpy failure. 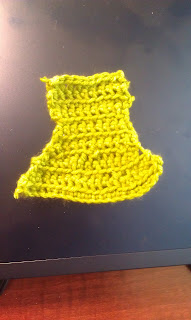 When I started realizing that things weren't going well, I decided to soldier on and get some help to make it less awkward, instead of completely giving up and starting over.

The thing is, in most areas of life, I hate failing.  It's something many instructors and professors have pointed out over the years, and it's frustrating because I don't know how to get rid of this fear of failure I apparently have.  It's even crippling me in theatre, which is supposed to be what I blindly pursue fearlessly.

But crafting?  No problem.  So far.

I have a few short knitting projects lined up after I'm done with what I'm currently working on, each with a really low chance of failure.  But after that, I hope to take on my biggest thing yet- a knit dress.

Problem is, if something goes wrong on shaping the raglan sleeves or the neck or anything, I'm gonna have to undo a crazy amount of stuff, and deal with that most unpleasant thing called failure.

It's the reason I'm hesitant to seriously attempt knitting lace.  If you haven't seen a lace pattern, they're kinda nutty.  I can understand every single piece of shorthand and still freak out when actually trying to make the pattern happen.

I wonder if, in spending this summer pouring all of my energy into learning new knitting skills,
it'll help me in my acting as well.  It'll help me realize, eventually, that I needn't fear failure, because I can have confidence in my abilities as an artist.

I just have to, you know, be able to knit without my arm hurting.
Posted by Unknown at 9:42 AM