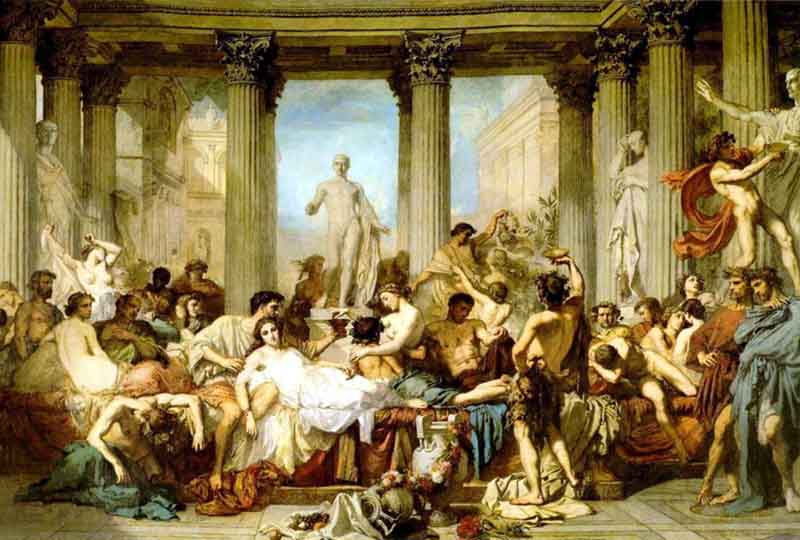 This is part 3 of a series on the Bible and homosexuality.  Here is part 1 and part 2.

Last time, I established that Christians, in discussing whether the Bible truly condemns homosexuality as we understand it, shouldn't be using the Jewish Law of the Torah to argue that gay people are sinners.  I also broke down the seemingly simple but actually quite complex Leviticus verse which is so often enthusiastically used to condemn queer people.

Of course, if it were just Jewish law with which there was an issue, my job would be done.  But many Christians know that what is probably the strongest verse condemning queer folks is found in the New Testament, in the Apostle Paul's letter to the church in Rome.  Brace yourselves, this one is intense.

"Because of this, God gave them over to shameful lusts. Even their women exchanged natural sexual relations for unnatural ones. In the same way the men also abandoned natural relations with women and were inflamed with lust for one another. Men committed shameful acts with other men, and received in themselves the due penalty for their error." (NIV)

Okay, context first.  A large chunk of the New Testament is letters written by Paul or attributed to Paul, providing advice and guidance for the various fledgling churches around the Roman Empire.  The names of these books in the Bible indicate the people to whom Paul was writing; for example, 1 and 2 Corinthians were letters to the church in Corinth*.

"Paul begins his letter in Romans 1-3 by describing the unrighteousness of all humanity, Jew and Gentile alike, and the universal need for a savior. Romans 3 nears its close with the famous verse, 'All have sinned and fall short of the glory of God'...in Romans 1:18-32, Paul writes of the descent of Gentiles into idolatry and the consequences for them of their rejection of God." -Matthew Vines, The Bible and Homosexuality

"In the first chapter of his letter to the Romans, Paul talks about a group of people who 'knew God' but 'neither glorified him as God nor gave thanks to him.' Their hearts are darkened, and they begin worshipping idols. As a direct result of this idol worship, they begin engaging in homosexual behaviors (which they previously were not doing). Ultimately, they become depraved and God gives them over to a whole list of sins." -Justin Lee, The Great Debate: Justin's View


The "because of this" in the verse in question is "because of the idol worship".  When Paul later lists the sins, homosexuality is not among them.

"They have become filled with every kind of wickedness, evil, greed and depravity. They are full of envy, murder, strife, deceit and malice. They are gossips, slanderers, God-haters, insolent, arrogant and boastful; they invent ways of doing evil; they disobey their parents; they have no understanding, no fidelity, no love, no mercy." -Romans 1:29-31


The homosexuality is in connection with the idol worship, not caused by it**.  The church in Rome would have been familiar with Roman fertility cults, where sex was indeed a part of worship.  This would be a specific image known to Roman Christians which Paul could use as an example of the problems associated with rejecting God.

"Notice that Paul talks about homosexuality in connection with the fertility rites (look for the 'therefore' in v. 24 and 'because of this' in v. 26), and not in the list of sins at the end of the passage. This is our clue that Paul isn't bringing it up as 'another example of sinful behavior.' Why, then, does Paul make such a big deal about the homosexual aspect of these rites? For two reasons: 1) to highlight the 'unnaturalness' of turning from God; and 2) to describe the rites in the most unappealing way he can think of, to unify everyone in saying, 'Yes! How disgustingly immoral!'" -Justin Lee


What does Paul mean when he talks about things being natural or unnatural?  There are a couple of explanations.  One involves looking at the Greek words Paul uses, and one involves the overall context in which the people of his narrative live.

Frequently in English, we interpret "natural" to mean "from, occuring in, or like nature".  Natural cleaning products have no synthetic chemicals.  Natural childbirth involves no pain-dulling medications.  What angers queer rights activists is when anti-gay people say, based on this verse in Romans, that being gay is "unnatural," because one can point to hundreds of other species of animals who have been observed engaging in homosexual sex***.  Both sides are wrong when it comes to Paul's usage of the word "natural".  Just like "abomination" in Leviticus:

"When Paul uses the term 'natural' and 'unnatural,' he really means what is customary and uncustomary. It wasn't customary for men to have sex with men in the Jewish context, but he saw it in the Greek [meaning non-Jewish] world, and so he saw that as evidence of worshiping the wrong god, of idolatry." -Reverend Jimmy Creech, For the Bible Tells Me So

"One of the most common meanings of the Greek word for 'nature' is custom, and that is how Christians widely interpret this passage in 1 Corinthians today. And the reference to what is a 'disgrace' or 'shame' is taken as specifically being shameful given particular customs." -Matthew Vines


The passage to which Vines is referring is 1 Corinthians 11:13-15, which reads:


Now, we all know that long hair on men isn't evil.  If a guy goes for a few months without a hair cut, it may not look good, but we don't find it morally offensive (at least, not anymore).  Paul's words on hair length are today considered simply a cultural issue which no longer is a concern for us, yet he uses the same Greek words in this passage as he does to refer to the sex being had in Romans 1.  What the Roman fertility cults did was "unnatural" to the Jewish people because their cultural customs forbade homosexual sex.

So, just as we've seen in the past, it's important to understand the meaning of the words originally written down, in the languages in which they were written.  There's still more to this passage than it would seem.

In the world of Paul, there was no understanding of sexual orientation like we have today.  People didn't have a notion of a sexual identity.  Men married and had sex with women because that was how babies were made.  Were there gay people even without this notion of identity?  Absolutely.  We see throughout human history, before the term "homosexual" even entered Western dialogue, that there were men who had genuinely loving relationships with men, and the same for women.  The cultural understanding, however, was that a sexually healthy man desired women and only women.

"In the ancient world, homosexuality was widely considered, not to be a different sexual orientation or something inherent in a small minority of people, but to be an excess of lust or passion that anyone could be prone to if they let themselves go too much." -Matthew Vines


In the picture painted by Paul, these people who knew God and chose to ignore Them were released to go to the extremes of behavior, including overwhelming lust.  The idea is that these people were heterosexual, but because they lost all guidance in what was right, suddenly went against their normal desires in the throes of sexual chaos and had sex with people of their own sex, because they were overwhelmed with lust.  Homosexuality was unnatural for them because their normal desires weren't for people of the same sex.

It's unnatural to me.

"Gay people have a natural, permanent orientation toward those of the same sex; it’s not something that they choose, and it’s not something that they can change. They aren’t abandoning or rejecting heterosexuality—that’s never an option for them to begin with. And if applied to gay people, Paul’s argument here should actually work in the other direction: If the point of this passage is to rebuke those who have spurned their true nature, be it religious when it comes to idolatry or sexual, then just as those who are naturally heterosexual should not be with those of the same sex, so, too, those who have a natural orientation toward the same sex should not be with those of the opposite sex. For them, that would be exchanging 'the natural for the unnatural' in just the same way. We have different natures when it comes to sexual orientation." -Matthew Vines


So Paul is not condemning homosexual relationships in all cases, no exceptions, both now and forevermore, and all God's people sang together amen amen amen.  His commentary on the homosexual sex he observed is quite negative, but it's because of what he saw it to be tied to: worship of the "wrong" gods, violation of tradition, and an unhealthy excess of sexual desire.

“His reference, of course, is to exploitive same-sex relationships among pagan Romans and Greeks. Paul certainly never contemplated the kind of monogamous, long-term relationships that are very much normal among homosexual people today.” -Reverend Peter Gomes, For the Bible Tells Me So


This is the key to any Biblical condemnation of homosexuality: none of it refers to consensual, committed, loving relationships, and to extrapolate these condemnations of excessive and unhealthy sex to mean that all gay relationships are bad is to have a double standard.

"We would never dream of reading a passage in Scripture about heterosexual lust and promiscuity and then, from that, condemning all of the marriage relationships of straight Christians. There is an enormous difference between lust and love when it comes to our sexuality, between casual and committed relationships, between promiscuity and monogamy. That difference has always been held to be central to Christian teaching on sexual ethics for straight Christians. Why should that difference not be held to be as central for gay Christians? How can we take a passage about same-sex lust and promiscuity and then condemn any loving relationships that gay people might come to form? That is a very different standard than the one that we apply to straight people." -Matthew Vines


So this is what we have: a Jewish man associating heterosexuality with Godliness and moderation because it was contrasted with the fertility cults of a culture not his own, where he observed sexual excess and interpreted it as a sign of inherent godlessness.  Paul has nothing to say in Romans about loving, committed same-gender relationships, because he had never seen such a thing.  It is, I think, bad theology to say "Paul says this gay sexual excess is wrong, therefore Ben and Luke's partnership of 25 years is equally wrong." There is nothing in Romans to suggest that at all.

Whew! So, that was the Romans passage.  Incredibly complicated, multi-layered, and used as a faulty foundation for arguments against the legitimacy of gay love and companionship.  Romans is, apparently, the most effect argument for anti-gay Christians because of its place in the New Testament, but closer examination reveals that this is not the case.

After this, there's just a question of semantics in the Bible, and then we can get to arguments based less in specific "Don't be gay" verses than in other areas.

Announcement: I'm moving into my dorm on Friday and starting classes on Monday, so expect blogging to become a bit spotty for a while as I determine a schedule that works with my other commitments.

*Insert Corinthian leather joke here
**When it says "God gave them over," I think it's meant to mean God stopped holding them to any kind of standard, and let them do what they wanted without any tugging of conscience
***My favorite example is giraffes- the majority of giraffe sex is male-on-male (link is safe, it's just my source)
Posted by Unknown at 10:07 AM