A Tale of Two Feminists: Thoughts on Anita Sarkeesian and Laci Green

STUPID REALITY KEEPING ME FROM WRITING ABOUT HAPPY THINGS LIKE PUPPIES.  Before I continue, have a puppy:


So there's been quite the crapstorm about feminism on the internet, lately.  Specifically, threats made against two feminist educators/activists, Anita Sarkeesian and Laci Green*.  These women have different missions, different video styles, and different things have led to threats of violence against them, but they both have been dealing with those threats lately.  I wanted to share my thoughts about both of their situations, but first I should summarize for those who haven't heard about what's been going down. 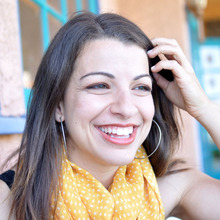 Sarkeesian is the creator of Feminist Frequency, a blog and video series devoted to looking at pop culture through a feminist lens.  Sarkeesian has looked at everything from Legos and Twilight to True Blood and  The Hunger Games.  I've followed her videos for a little while and love what she does.  She's always intelligent and critical in her analyses, and is gender-, race-, and sexuality-conscious in her criticism.

Recently, Sarkeesian announced that she had started a Kickstarter campaign to raise money to fund a video series looking at the portrayal of women in video games, with a goal of raising $6000.  When word began to spread of her project, however, the outrage from the nerdsphere began: among other things, Sarkeesian received crude drawings portraying various video game characters raping her, and one Ben Spurr made a video game encouraging people to punch an image of Sarkeesian, her face becoming more bruised and bloodied the more the player hits the image.  All of this, take note, was in response to an announcement that Sarkeesian would be looking into the portrayal of women in video games.  She hadn't even raised all of the money she needed when the abuse started, much less made any analyses about anything.

She has ended up raising over $160,000 from supporters in response to the threats, and plans on moving forward with her series.

Please be advised that many of Green's videos are frank and sometimes explicit in language- follow links at your own risk.

Green is a sex educator on YouTube.  Every week she puts out a video on some topic relating to sexuality, anatomy, gender or social attitudes towards any of those things.  She's covered fat-shaming and body positivity, the difference between gender and sex, and controversial issues such as prostitution and circumcision**.  She is gender- and sexuality-inclusive, and when pressed to label herself identifies as pansexual and genderqueer.  Green is interesting to me because while she's so open-minded about sexuality and relationships, she's very narrow-minded about the role religion should play in society.  She's been particularly critical of Islam and Mormonism (interestingly, her father is Iranian Muslim and her mother is Mormon).  Back when Green was younger, around 18, she was popular around the atheist vlogosphere because of her videos pertaining to atheism and criticizing religion.  These days, however, Green's videos only mention religion when it's relevant to the discussion at hand.

Back in 2009, Green made a video in which she used the word "tr*nny" to refer to transgender people.  At the time, she was uninformed about the negative connotations of the word, and the harm it causes the people against whom it's used.  Recently a fan sent a message to Green on her Tumblr asking about the video and why she used the word.  Green responded:


Probably because I was 18 and ignorant. You are totally right and I sincerely apologize for my mistake. Before I educated myself about trans issues I had not the slightest inkling of how the word is used to dehumanize nor its place in the cycle of violence against transfolk. Now I have seen people hurt by it and seen it used as a nasty slur. Words have power, and "tranny" is not a word for anybody but transfolk themselves to use because only they can reclaim it. If I knew that was in a video, it would have been long long ago removed. Consider it banished forever.

After this, she started receiving abuse from people alleged to be social justice bloggers on Tumblr (but most likely just jerks) because of her use of a slur from three years ago for which she apologized in a humble, appropriate way.  People were finding out her addresses and sending death threats, calling her transphobic and Islamophobic.  Finally, Green announced on Tumblr that she would be withdrawing from the internet until further notice; she had received an email containing pictures of her apartment and threatening to punch her face and kill her.

MY THOUGHTS ON ALL OF THIS CRAP (in bullet points)

I personally am saddened by the negative reactions against these women from all sides.  Sarkeesian and Green are both smart women who offer fresh, unique content on issues we all deal with.  Green-haters especially frustrate me because the way they talk about her negates the fact that many people, including myself, have seen improvements in self-esteem because of her work.  I'm more comfortable with my body and my sexuality because of Green.  I also adore Sarkeesian because her criticism is intelligent but accessible, and has helped me be better at analyzing pop culture through a feminist lens. Both of these women have made me a better activist and a happier human being.  I pray for Green's safety and for the success of Sarkeesian's project.

How about some more puppies?  I think we can all get behind that.


For other people's thoughts on these things, check out these links:


"Internet Social Justice Mob Goes Batshit on Activist, Has No Sense of Irony" from Jezebel
"Nerds and Male Privilege: Tropes, Trolls, Haters & Anita Sarkeesian" from Doctor Nerdlove
"Hey, Let's Make a Video Game So We Can Beat Up a Female Critic of Video Games!" from Jezebel

*"Green" is not actually her last name.
**Yes, it's controversial.  SF Pride confirmed that.
Posted by Unknown at 9:13 AM